While Daniel has been to our dance group's events, the Bath Minuet Company 18th century ball was his first proper dress up event, so of course I was super excited!
Because I'm still breastfeeding, and he won't nurse unless my boobs are pretty much loose, free and easy, I was limited in what I could wear, if I didn't want to be mad and make something new! So I added a teeny bit of boning, in the form of some cable ties, to my gestational stays, and wore the silk chemise dress I made for an 18thC wedding we went to when I was 7 months pregnant. Calum wore his 1790s ish suit to match, and I made Daniel a white muslin gown with lace trimmed sleeves, many many growth tucks, and a blue sash. Add the obligatory red shoes and the last minute addition of a ridiculous pudding cap, and we were all set :) 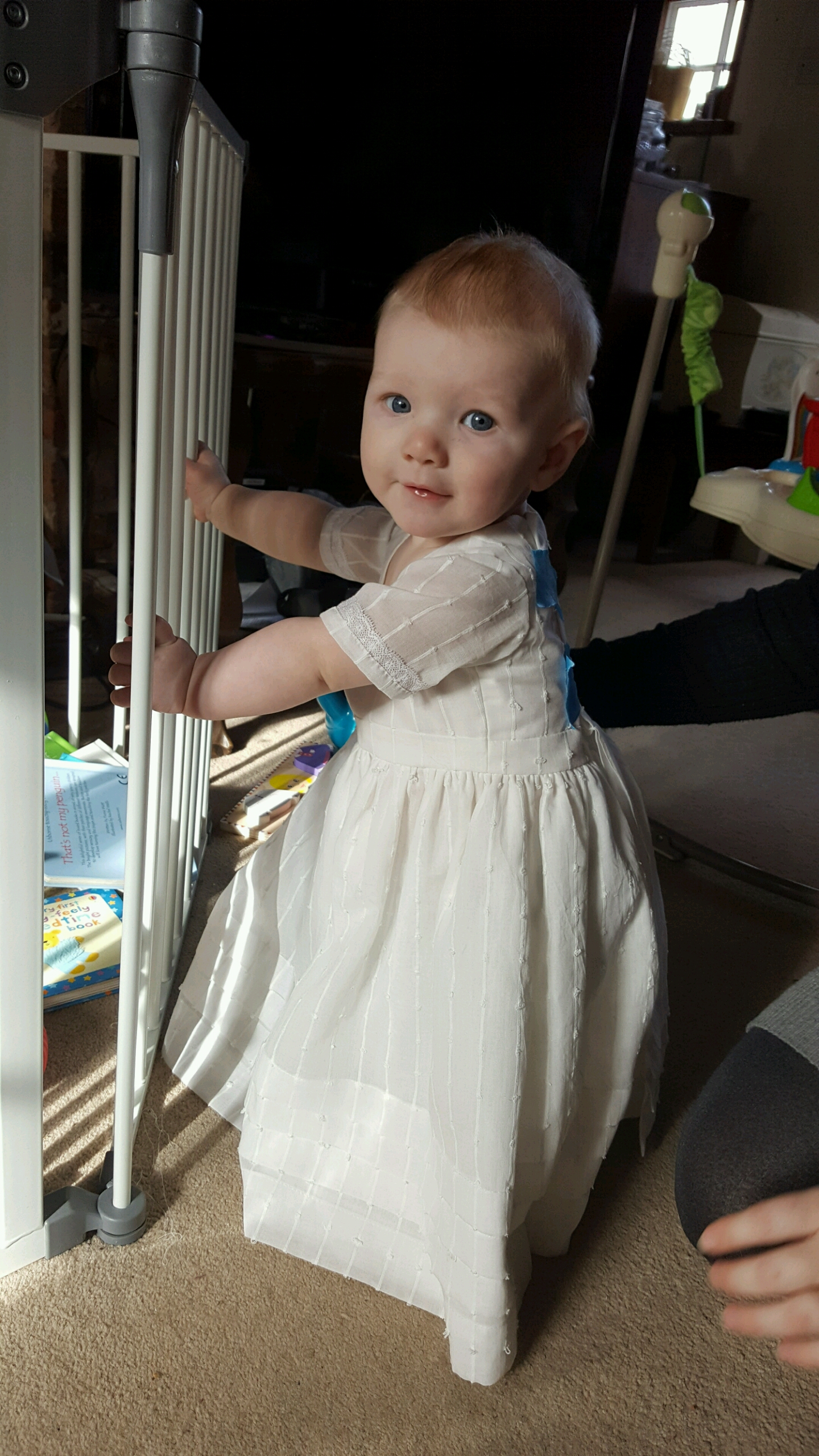 Fittings are much easier once your model can stand! 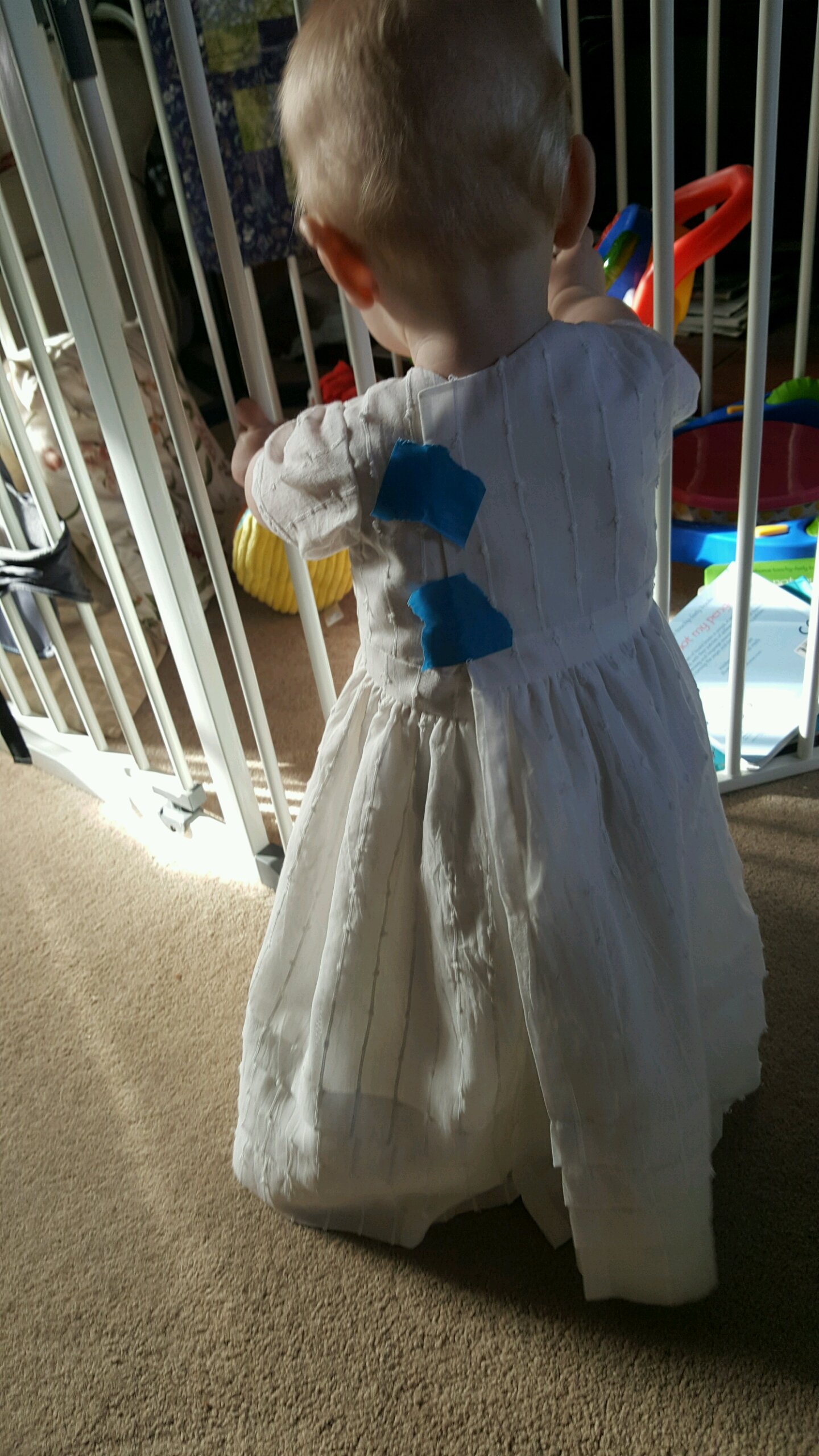 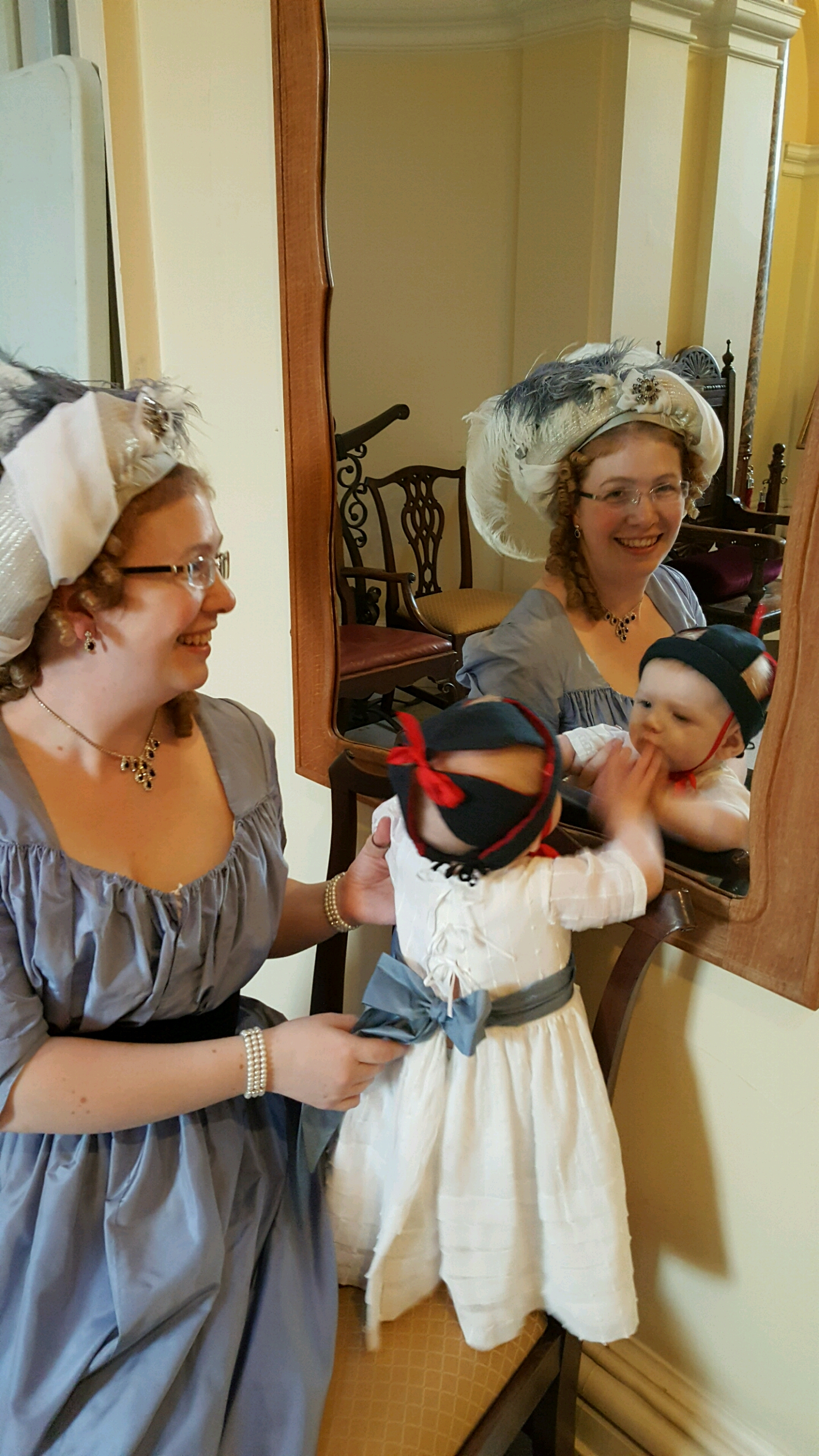 Attempting to recreate this portrait: 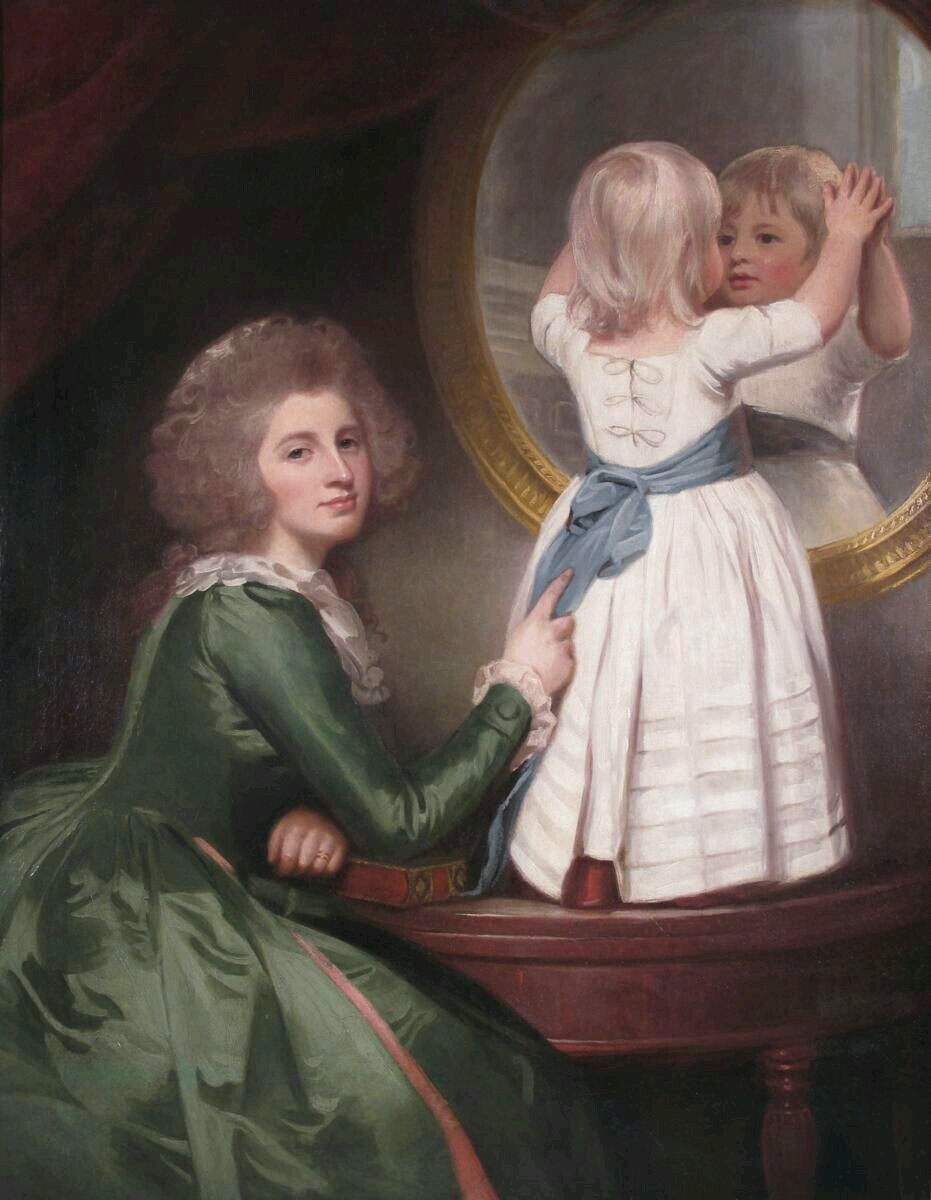 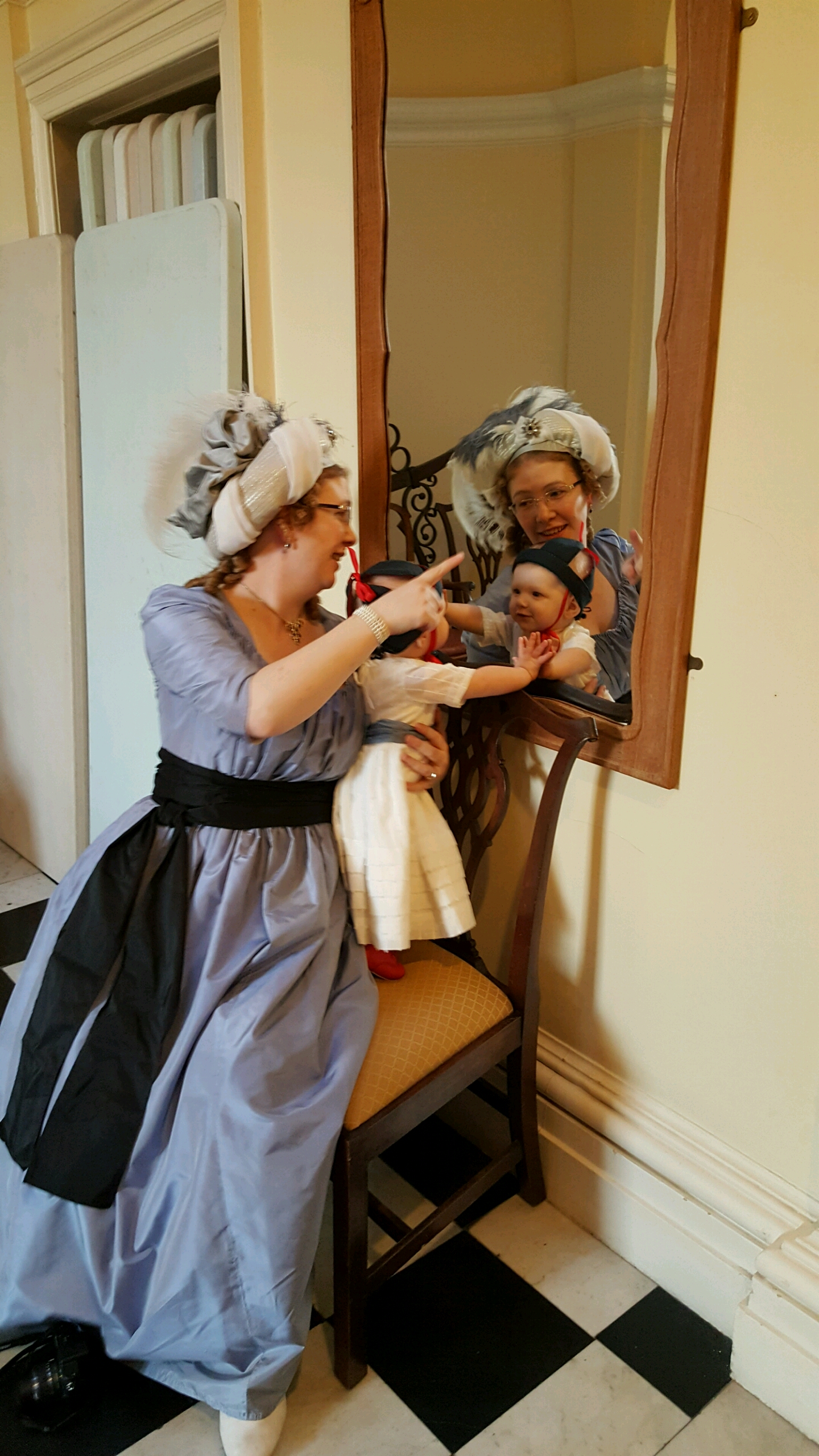 Trying to convince him to look at daddy! 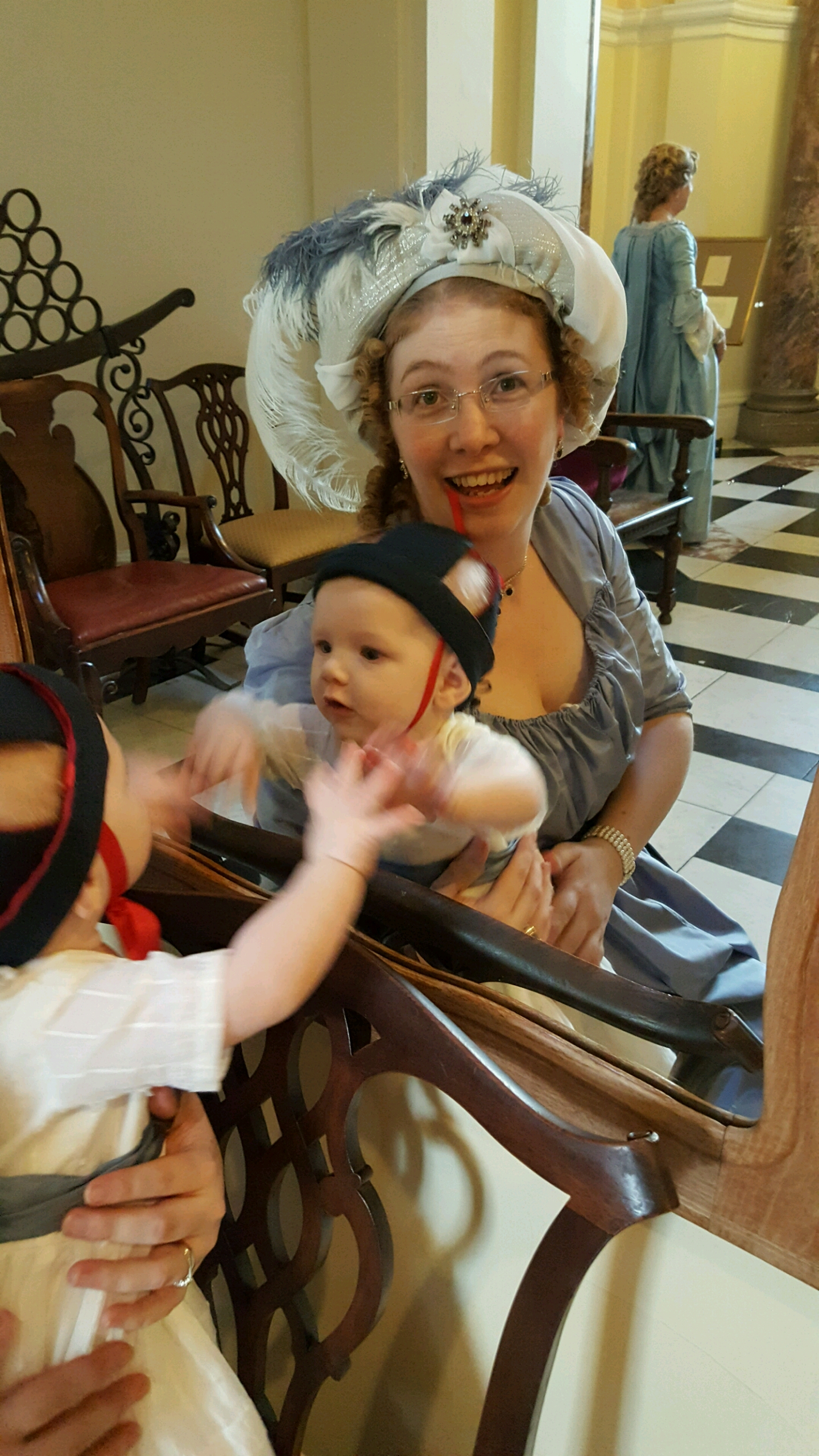 "But! The baby in the mirror is much more interesting than daddy, mama!!" 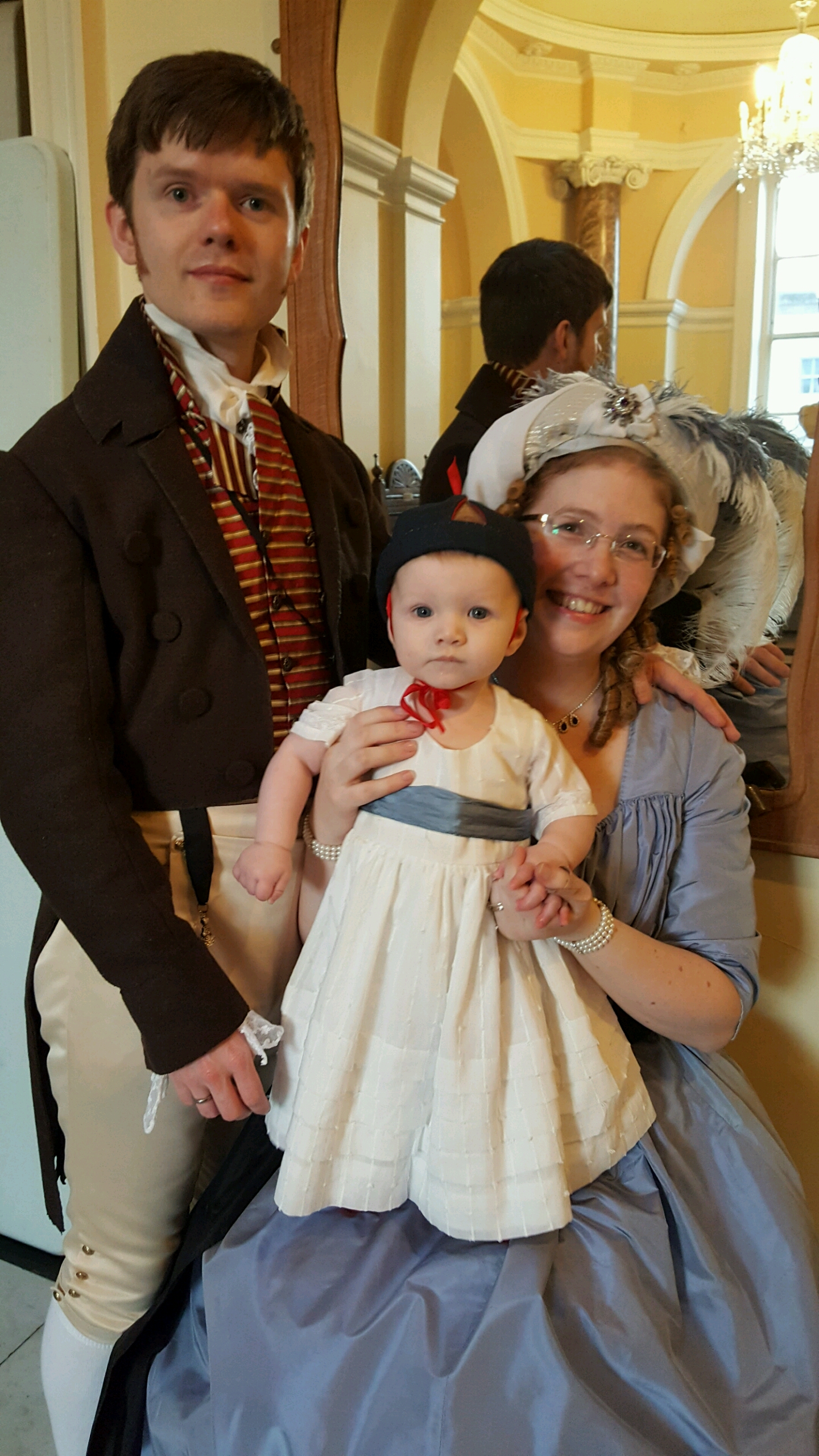 The three of us :)
He's already shot up, so I'll need to take out a tuck or two before he wears it again! But luckily there's lots of extra room in the bodice :)

Oops it's been a while since I posted anything! I guess I really ought to introduce you to someone! 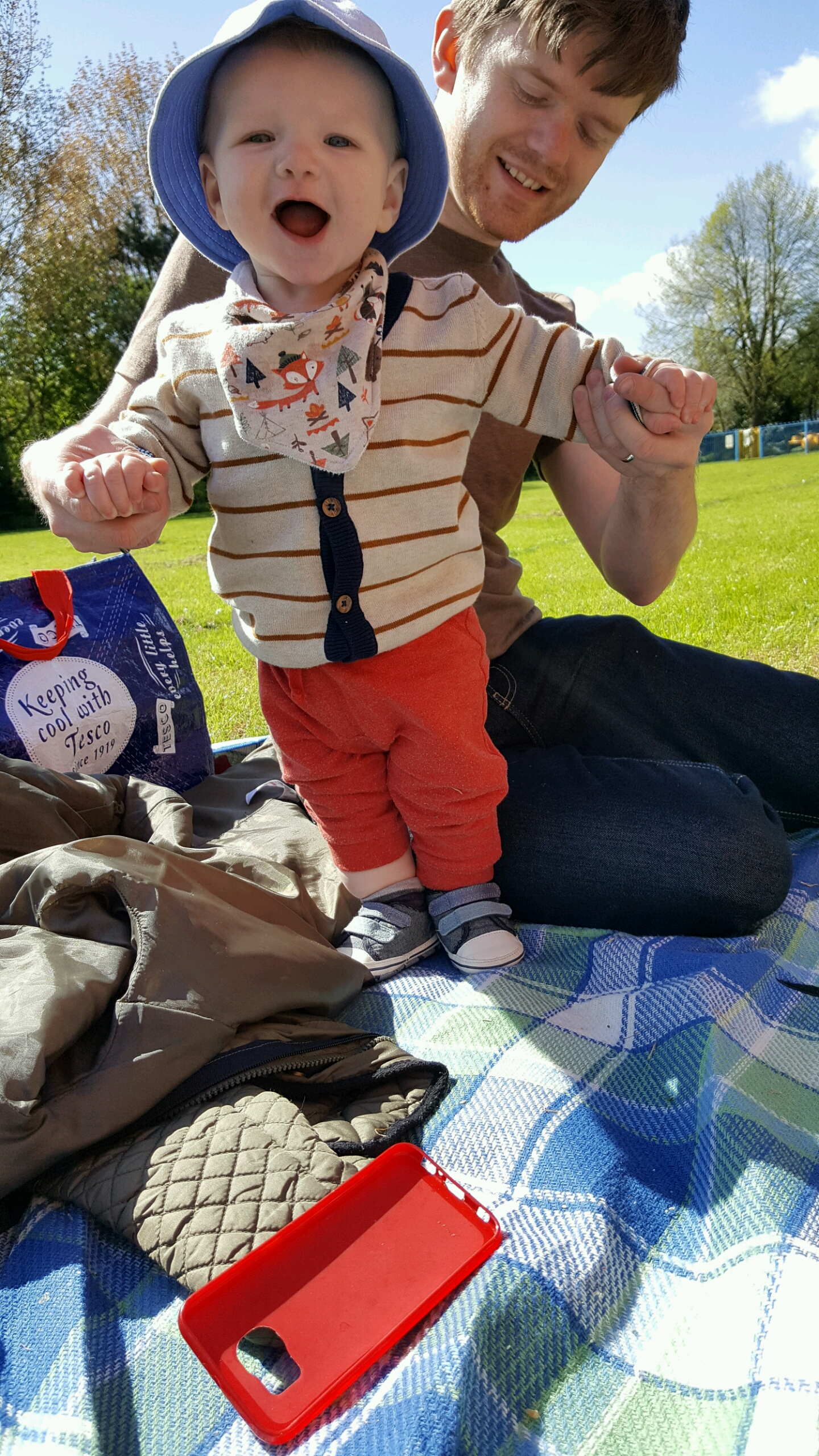 This is Daniel! He was born on the 11th of September, 9lb6oz. 11 days overdue and after 5 days labouring and then 24 hours being 'induced', I ended up with an emergency C section, but we got there in the end!

He loves to eat: 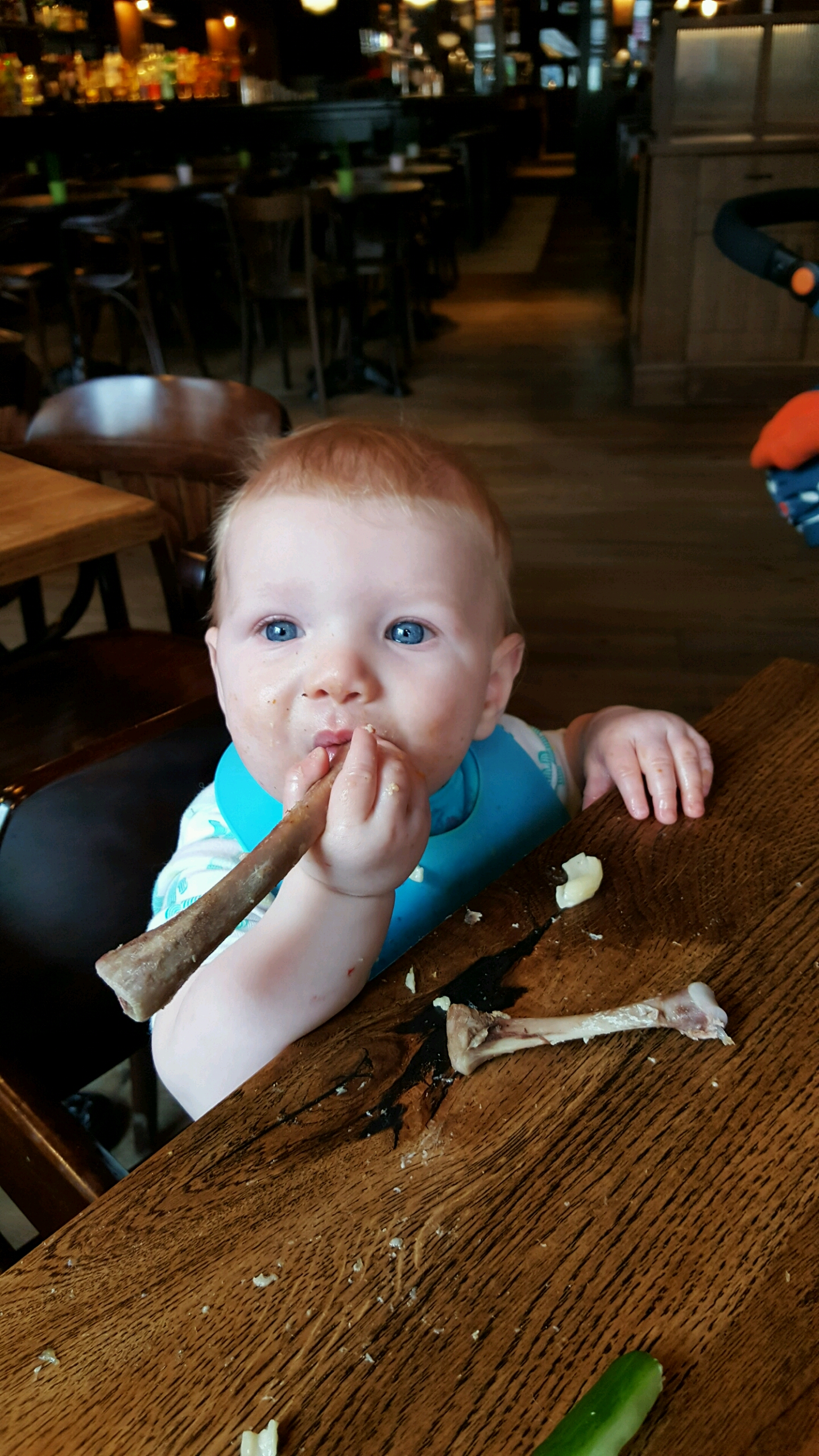 He loves to stand: 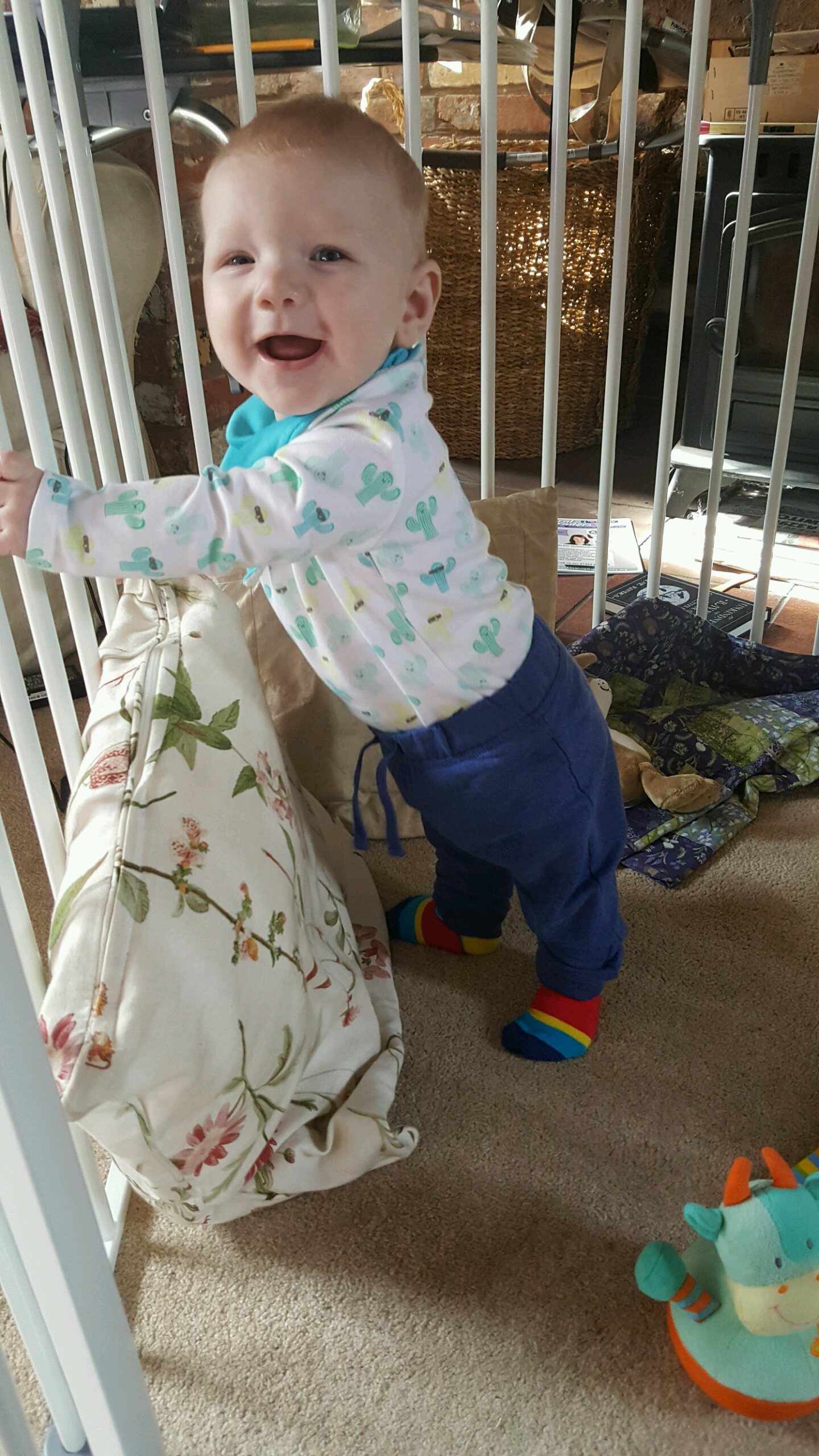 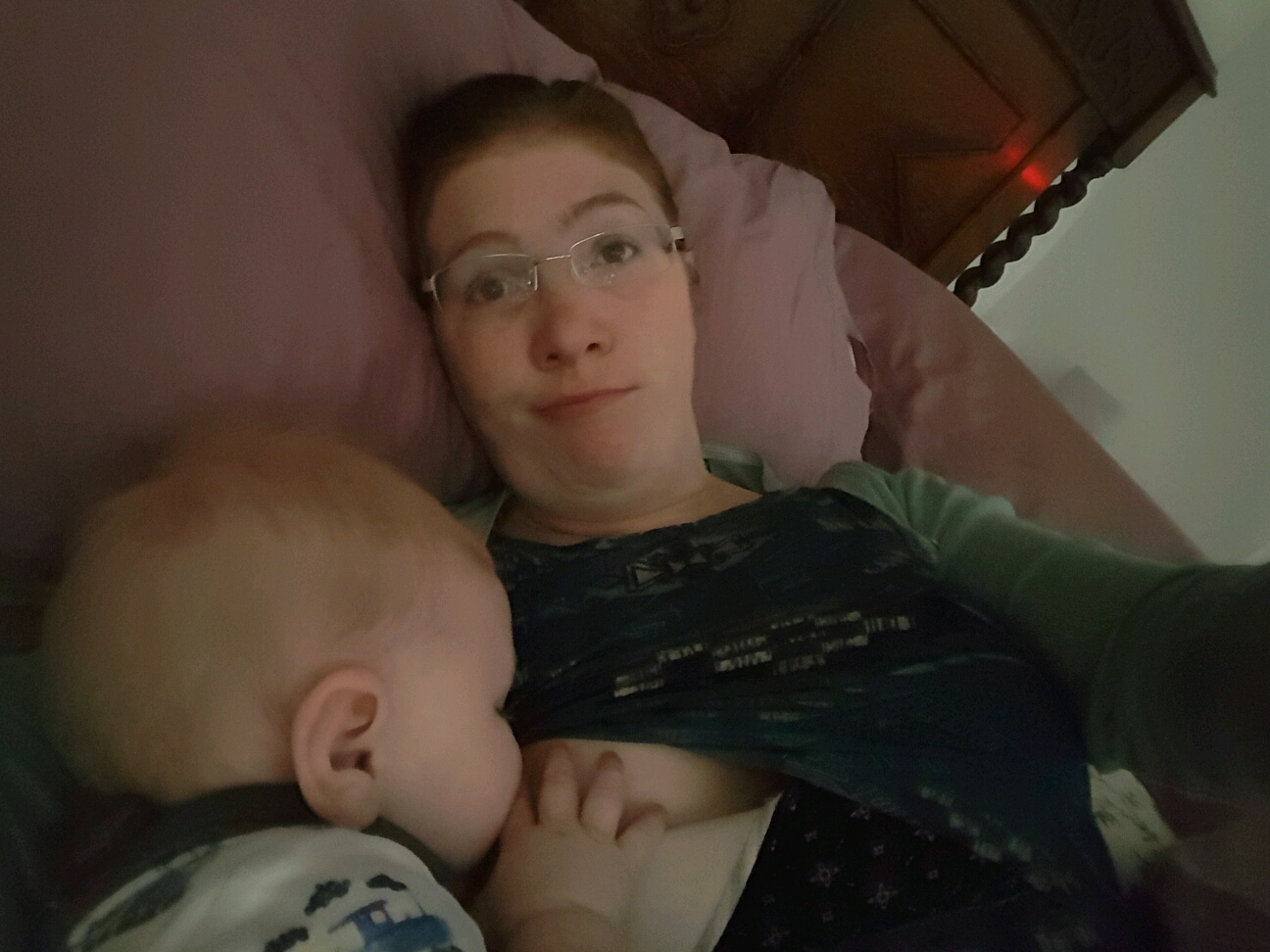 And snuggles with mummy: 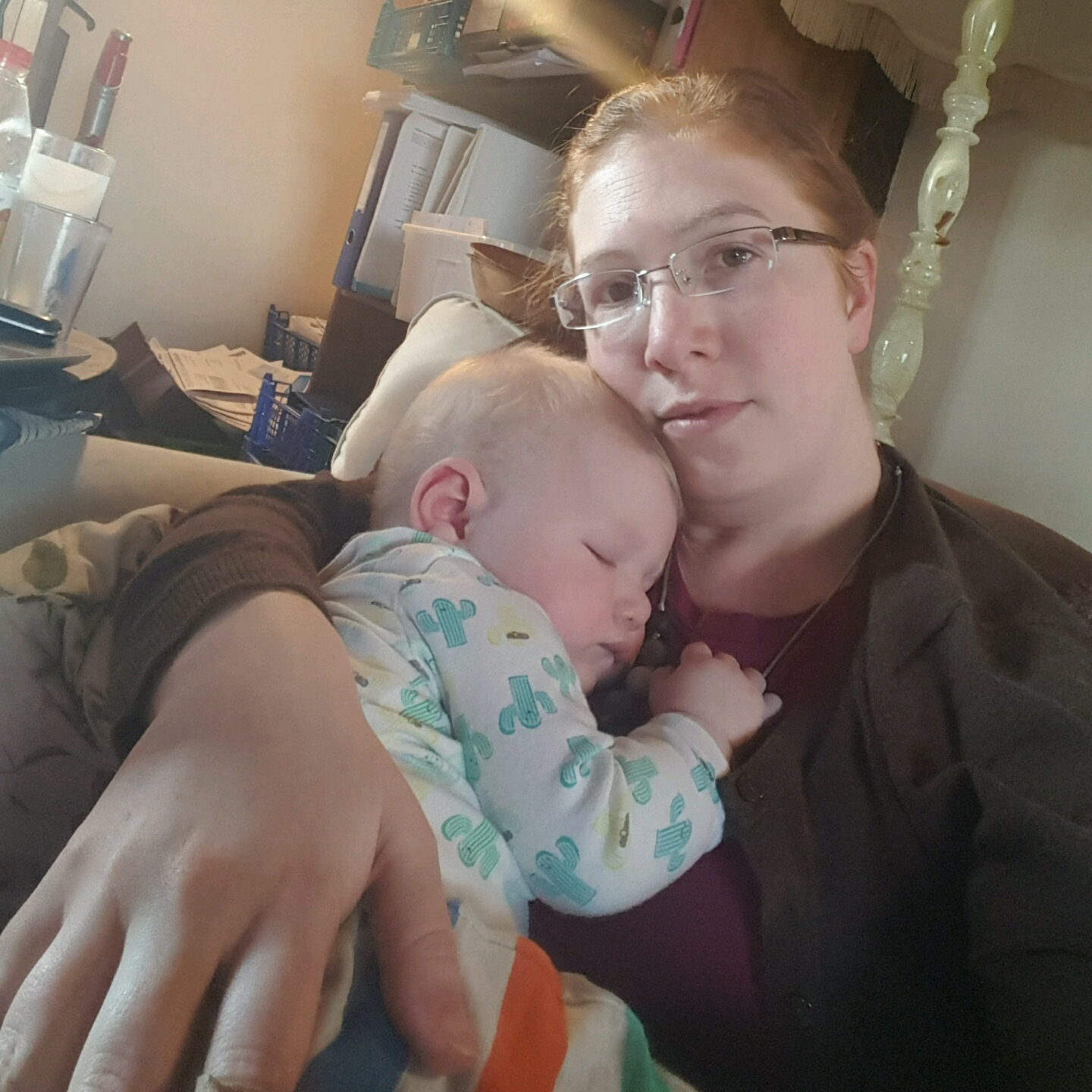 He's gorgeous and exhausting, super hard work but well worth it! And already been to his first public ball! More on that in another post :)

I finished it just in time! hemming the cuffs and sleeve bands in the car doesn't count, right ;) It fit really well, and looks so cute! won't do much about keeping my neck/chest warm, but until my boobs stop growing (if they ever do!) it's the best I can do and is much better than nothing! 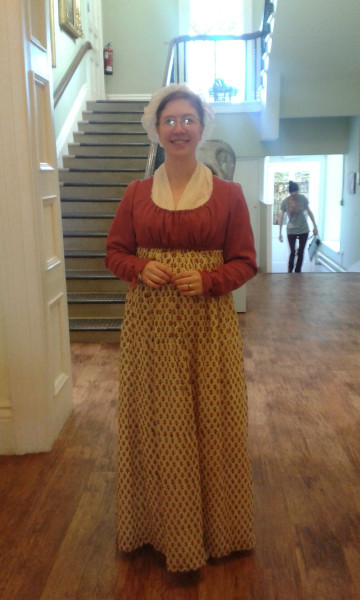 The colour of the wool goes so well with the dress fabric that I had to use it again, (seeing as the last spencer I made from this fabric didn't work out, the fit was dreadful for some reason, and I can't remember where it is!) 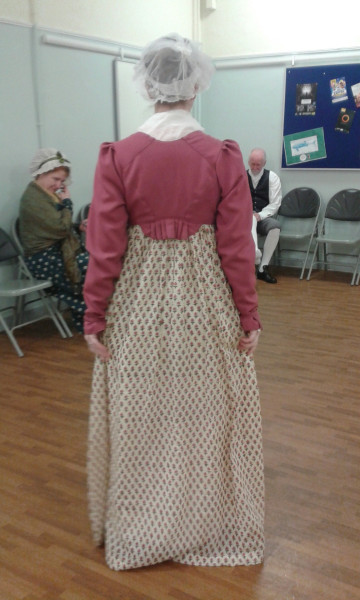 I could probably have cut the back waistline a bi higher, but I'm always paranoid about my dress bodice showing that I er on the side of caution a little too much I think, and with the peplum it wouldn't have mattered anyway! 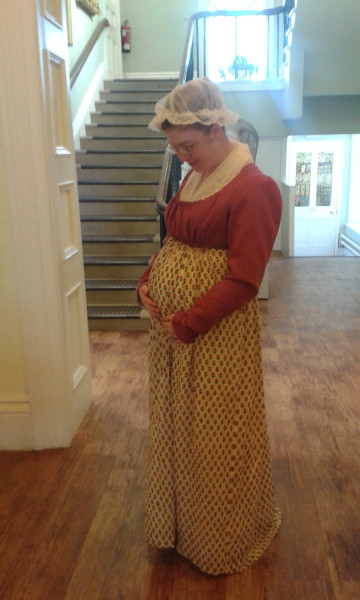 Baby :) he's been kicking away like a right wriggle-muffin the last couple of weeks! (and yes, according to the scan we had at 16 weeks, I'm growing a penis!) 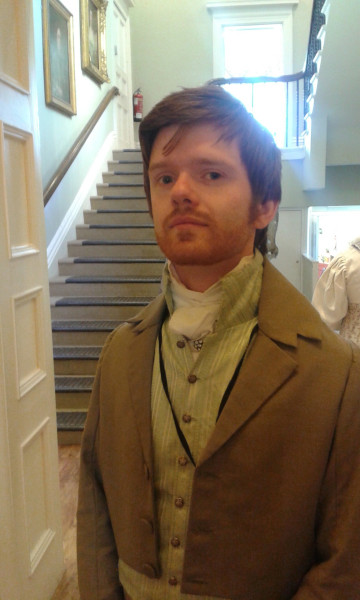 And a quick snap of a smug looking Dad to be ;)

Sewing for a baby bump are hard. Just wanted you all to know that!
We're going to a wedding next month for some of our reenacting friends, it's being held in a Mansion in the countryside and they are having a Gerogian ceremony and ball the first day and a Regency picnic the second day! Sounds like it's going to be one epic wedding, and I cannot wait! Only trouble is, only 2 of my Regency dresses fit, (and you know how huge my selection is, none of my spencers and pelises fit either, BTW) and not a single one of my Georgian gowns fits. None. Not even the sack backs with the internal ties let out :( they would fit over the bump but not round my chest. Not only has my ribcage expanded [from a 32 to a 36 band size] but my boobs have got enormous!) So I've spent the last week or so of my Easter holiday from school making a silk chemise dress for the wedding, and now I'm going to have a go at a gathered low necked sencer, like Mdme du Jard's Spencerino: http://mmedujard.blogspot.co.uk/search/label/spencerino and this one from Kleidung um 1800: http://kleidungum1800.blogspot.co.uk/2012/07/ein-hauch-von-sommer.html
We've got a Regency dance demo on Sunday which is inside, but a spencer might be usefull if it's cold, so I'm hoping to get the spencer done for that, and then I might make a cotton print chemise dress for the day of the wedding, leaving the silk for the ball in the evening, just in case it's either raining or hot and sweaty, two equally likely options for the middle of May in England!

Thank you all so much for your lovely comments to my last post. Something that a couple of you said really makes me think how lucky Calum and I have been through this whole process. We deliberately told our best friends and family as soon as we knew we were pregnant because we didn't want to have to explain to them why we were sad if anything happened, and I'm so glad we did. Everyone that matters to us had invested almost as much in the pregnancy as we had, so they were able to be as sad as we were, and no one said 'oh it was only early days, so now it's time to get on with your lives and move on'. Mummy asked me yesterday if this experience has made me wary of investing as much so soon next time, and I said no, I wouldn't change anything, the 3 months we had day dreaming about Brassica were wonderful, and if they did make it harder to bear her loss, not being excited wouldn't have made any difference to how sad we were, and we'd have missed out on such a wonderful time.
The way the hospital treated our loss, as well, was so compassionate. Every step of the way they knew we were grieving as much for our baby of 14 weeks as any parents who lose a baby. My friend Mel lost a baby at 16 weeks 22 years ago and it was just brushed under the carpet, no support for her grief, just medical speak for the bodily function that hadn't worked properly. Things have come on so far for women and I'm so very grateful. I also feel like, at least in England or in my social circle, people are prepared to talk about their miscarriages in a much more open way than before, which can only be a good thing. People I've talked to who lost babies years and years ago still have the raw emotions of when it first happened because they weren't allowed to grieve properly by society. I know everyone thought it was for the best, like a lot of things 'least said soonest mended', but I'm so glad things have moved on since then. We talked to the vicar in the week before the wedding, to tell him about the baby, and his first response was would we like a little memorial/funeral service to help us come to terms with it and get a little closure before we got married, something I can't imagine happening 20 years ago.
Thank you for listening to me ramble on! And there's some other news to add to the mix - we're moving house! Our house has been on the market on and off for the last 2 years, so when we had an acceptable offer made on it we had to jump at the chance, but originally our buyers wanted us to move out this weekend! A week after the wedding! Then it was next weekend, but now it looks like it'll be the weekend after that (which is a good thing, as we're off to Devon on Sunday for the week, for our mini-moon!) So not only did we get married and lose a baby we'er moving house. Enough stress do you think?!

Thank you all so much for your lovely comments on the wedding pic :) Now to catch you up on the rest of my news...
First things first, the horrid part. Back in June Calum and I found out we were pregnant, and on the 14th of August we lost our baby.( Collapse )

So a week later we got married, and while it was the best day of my life and I've never been happier, it was definitely tinged with a great deal of sadness. Calum said to me last night that in some ways the baby was more of a vow than the words we said in the church, and I think he's right.

Please forgive me, but so much has happened in the last month, I've experienced the saddest thing and the happiest thing a woman can, but for right now, let me just say, this happened on Saturday: 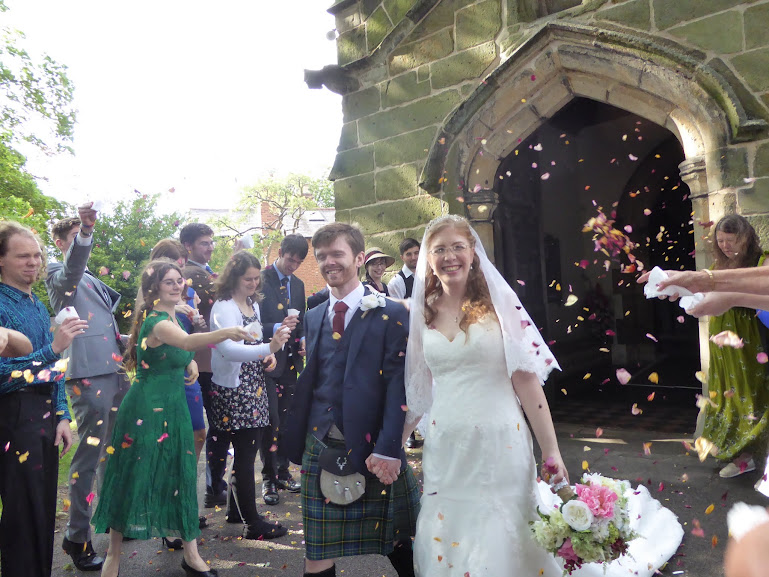 and right now, I can't imagine that any other person can possibly be as blessed as me except maybe Calum ;)

Proper photos have obviously not appeared yet, but when they do, expect updates, and I'll fill you in on the rest in another post.

Wow, has it really been two months?! what is wrong with me! I'm so sorry you guys! I would like to say I'll be better, but all I can really say is I'll try :(
Anyway, here are some photos of Calum's new 18th Century ball attire, with the huge labour of love that is his gold-work embroidered waistcoat :) I can't tell you how pleased I am with how it turned out, and so ( Collapse )

Wow that's a lot of photos :) But I'm proud of it so you'll just have to put up with me! I have some more photos of other recent events I really should post, but I've been hogging rather too much of the bandwidth, so it'll have to be another time, I just hope it won't be another two months...

Wow it's been ages! I can't promise I'll get any better but I'll try! Anyway, for a taste of what's been keeping me so busy, pop

Then this last week I've been stuck off work sick with what seems suspiciously like flu :( but hopefully I'm starting to get better now (although, I thought the same yesterday, then I woke Calum up at 5 this morning with dilerious ramblings and have felt like I've been running marathons all day...) Oh well!!

I can't believe I've not posted here, but guess what? Calum and I are engaged!!!!!!

This selfie was taken at the scene :) We took Emmy to a lovely local park for a walk on Sunday November 23rd, and after clambering round on some rocks we went to rest on a bench looking down over the hill to a herd of deer (complete with splendid antlers!) Emmy was being very good, just snuffling round, and then he got down on one knee (in the mud!) and popped the question :) I cried, and he was a bit damp round the eyes, and it was just amazing! He couldn't have picked a better way to propose, and we couldn't have had nicer weather!

We took some photos a couple of days later when we were all dressed up for a date to celebrate :)

He loves Emmy so much :) it's great, especially when I remember him saying he didn't like dogs on our first date (he was afraid of them after being knocked down by a big dog when he was a little boy of 3) but who could resist this face?!!

This pic is from the day before he proposed, we were at a friend's 60th Birthday party, theme 'gorgeous'! (do you like my dress? it's based on a free petticoat pattern from http://buzzybeesworld.blogspot.co.uk/2011/12/ruby-slip-free-pattern-and-sew-along.html )

What 'we're engaged' post would be complete without a ring shot ;)
Collapse